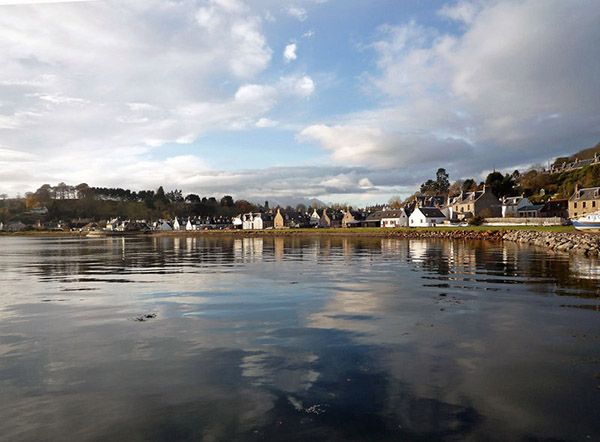 Situated on the A832 on the south coast of the Black Isle lies Avoch, a conservation village steeped in history.

Avoch is particularly famed for its long fishing heritage.  Fishing for herring and sprats in the Inverness and Beauly Firth provided much of the local living for the thriving village which lasted for more than 100 years.  Today the waters are protected and although there are Kessock herring in the Firth, they are no longer commercially harvested.  Avoch today still has a modern but much reduced fleet, now working much further afield.

Being a fishing community in an area dominated by agricultural communities, Avoch's dialect developed in isolation.  For instance, Avoch is pronounced Auch as the 'v' is always silent.

The old town is still available to walk around and includes the Dock area which was named by local fishermen drawing their boats up on the beach before the harbour was built.  The narrow streets running at right angles to the shore called the ‘streeties’ bear the family names of the Mackenzie lairds of Avoch.  Just across the burn mouth lies Henrietta Street where you can see a row of low white-walled fisher cottages.

The harbour is just at the eastern end of the fishertown area, and was built in 1815 to a Thomas Telford design.  In 1903 the , the harbour was further extended to accommodate an increasing fleet.  The Avoch Harbour Trust was formed in the same year and still manages the harbour today.  The changing use of the harbour has led to the installation of pontoons for local and visiting yachts.

To the west of Avoch, forming a headland, is Ormonde Hill, also called Ladyhill, and is the site of an ancient castle, Ormond Castle, built around 1197 and was once the home of Andrew de Moray, joint leader, with William Wallace in the first Scottish War of Independence against Edward I of England.  Ormond Castle is a scheduled ancient monument enjoying the highest level of legal protection available in Britain due to its national significance.  Avoch Community Archaeology is working on an on-going community project to discover more about the castle site and history in greater detail.

Roseaugh Estate, on the outskirts of Avoch, was once one of the most prosperous in the area. Certainly it had the most splendid buildings, and the most extravagant design.  Starting in 1864 when he inherited it, James Fletcher embarked on a series of improvements and embellishments.  The main house became a virtual palace, with turrets and balconies and a huge blue dome.  There was a heated pool within the house, and in the grounds he had badminton courts, croquet lawns, horse racing course and 2 artificial lakes.  The buildings in the grounds were built in different styles; two were Tudor, one Georgian and the boat house was Bavarian. There was a huge walled garden which housed an orangery, had a mile of ornate glasshouses with beautifully tiled floors, and a semi-subterranean palm house which had an elaborate glass roof.  The furnishings and fittings were both expensive and exotic. In 1953, after the death of Lilian Fletcher with no heirs and unwanted by other members of the family the house and contents were sold.  The house was too expensive for anyone to maintain, so it was demolished, and all that could be sold was sold at auction.  All that remains now is a stone stairway leading down to the former gardens.  The grounds are still there however, and some of the other buildings remaining.  The estate offers excellent walks through mature, woodland with stunning views.

The village of Avoch is full of character, and is well worth a visit.  There are many walks around the area, including Ormonde Hill, the fascinating streets, Rosehaugh Estate and the pretty walk along the old railway line path to Fortrose.  The village is well supplied with local shops, and also - a traditional Fishermen's Co-op selling everything from outdoor clothing to kitchenware.