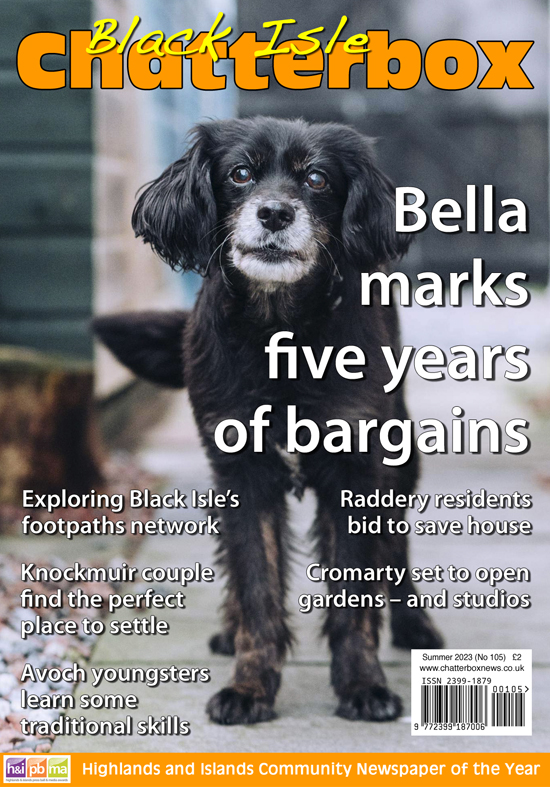 Avoch said farewell to one of its oldest residents when Audrey Malpas left the village to be closer to her daughter in Wales – and as Chatterbox was founded more than 20 years ago by her late husband, Jack, it seemed only fitting that she should be the cover star of our Autumn edition.

Another familiar face in Avoch – but who has no intention of leaving – belongs to Annette Patience, known to many as Nettie the Knitter. Lockdown proved no hardship for a woman with needles and a good supply of wool. She tells us about the hobby that’s sustained her for more than 70 years.

Someone else with more time for hobbies is retired electrical contractor Jackie Morrison from Fortrose who’s spent eight years restoring a classic Triumph TR4 he discovered covered in soot and forgotten in a shed in Falkirk. The gleaming machine is now on the road and turning heads – we take a look.

Still in Fortrose, new life has been put into the former police station by Scott MacKenzie and Charlotte King, the team behind Bakhoos Bakery, quickly winning plaudits for its sourdough bread and tempting cakes. Of course we had to visit.

Another couple enjoying a business boom is Neil and Kenna Morrison, whose lamb and pork is becoming popular on tables around the Black Isle and beyond. We were invited to the croft at Resolis to find out more.

New in Cromarty is Eliza’s Path, which smooths the passage of walkers visiting the historic St Regulus Burial Ground and the surrounding countryside. We learn all about it, and some of the history to be found there.

Muir of Ord to Cromarty is a challenging walk but postmistress Estelle Quick made light work of the 25 miles and raised more than £1,200 for charity. She describes her route and shares some of the photos taken along the way.

Also inspired by local sights is musician and composer Hilary De Vries from Munlochy, whose Black Isle Collection features 70 of her tunes and is on sale now.

And there’s much more inside the latest Chatterbox – out now, 48 pages and still only £1.50. Don’t miss your copy.