During the lockdown many organisations are finding creative ways to engage their supporters and friends. The Mamie Martin Fund, a charity which supports girls’ education in Malawi, had planned a cycle tour in the Central Belt but that felt uncertain in recent months. So a stay-at-home version was launched and the idea as taken up enthusiastically in the Black Isle and beyond as 15 people signed up. 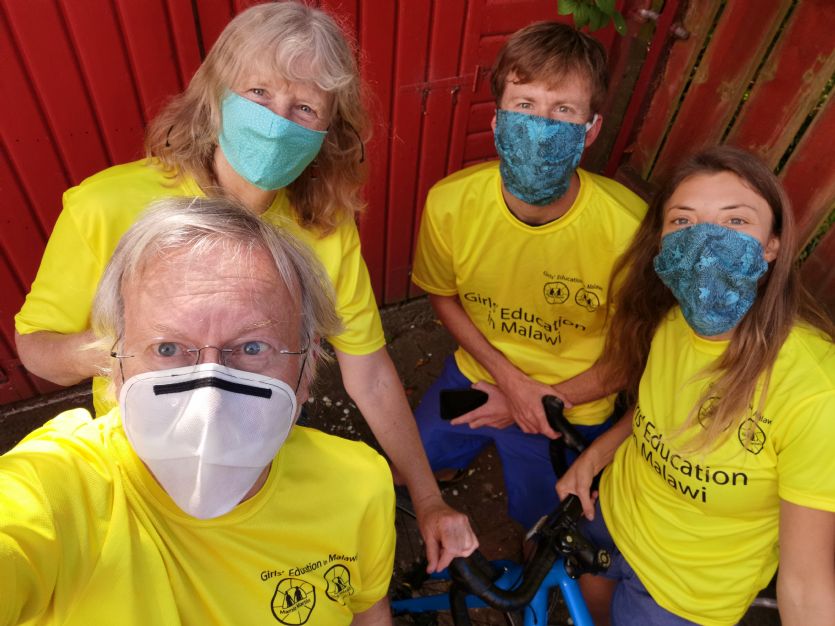 The route is 210 miles long and these cyclists are clocking up that mileage on their bikes locally. Jean Gordon and Richard Robinson in Fortrose got their friends involved. Their son James and his partner Lucy, who live in England, also signed up but travelled to Scotland to do the miles – any excuse for a trip home!

Jean said: "With Covid-19 and lockdown, we, like so many others, have been turning to our local countryside for entertainment and activity. Taking part in The Mamie Martin Fund's Stay at Home bike ride has encouraged us to explore the network of roads, paths and forest tracks that criss-cross The Black Isle. Knowing that our travels - and bright yellow MMF T shirts - are raising awareness of the importance of girls' education in Malawi, as well as funds to enable girls in poverty to go to school, has made those journeys, however short or meandering, even more worthwhile. Story on Bikes has really caught the imagination of friends and family too, from the Highlands to Lancashire, offering lots of opportunities for us all to connect and keep in touch with each other."

The ride is about the story of Mamie Martin, who had an important role in promoting and supporting girls' education in northern Malawi in the 1920s. It will be launched in Blantyre, David Livingstone's birthplace, on Saturday 1st August, and will visit places in Scotland which are important to Mamie's story, including Tarbet, where she grew up.

One of the group cycling between Blantyre and Tarbet is Violet Hejazi, a young woman from Syria, who is enjoying her freedom to cycle in Scotland. She has been given a bike by Bikes for Refugees Scotland and is supported by Bike for Good in Glasgow. Her neighbours and her sister's friend have been very supportive; many Individuals offered to help in terms of helping her to fix her bike or offering a rescue vehicle in case needed. She greatly appreciates this support.

About the Mamie Martin Fund: Mamie Telfer lived in Tarbet, Loch Lomond and was a teacher in Helensburgh. She married Jack Martin in 1921 and they went to Malawi as missionaries. Mamie was concerned about the lack of educational opportunities for girls there and set up classes in the villages. Sadly she died in 1928, leaving a baby daughter, Margaret. Margaret grew up in Scotland and established the Mamie Martin Fund (MMF) in 1993 with the aim of advancing the education of girls in secondary school in North Malawi, taking forward her mother's work. MMF currently pays the fees of, and supports, 138 girls across six schools, including six girls at a school for Deaf children in Embangweni. MMF works with the CCAP Synod of Livingstonia, Mchengautuba Community Day Secondary School in Mzuzu and with the RC Diocese of Karonga. At least one MMF Trustee visits Malawi each year as part of their governance.

Mamie would be so happy to know that connections between Scotland and Malawi are even stronger today and that her conviction about the necessity of educating girls is now widely accepted as true around the world.

You can encourage the cyclists on the fund-raising page